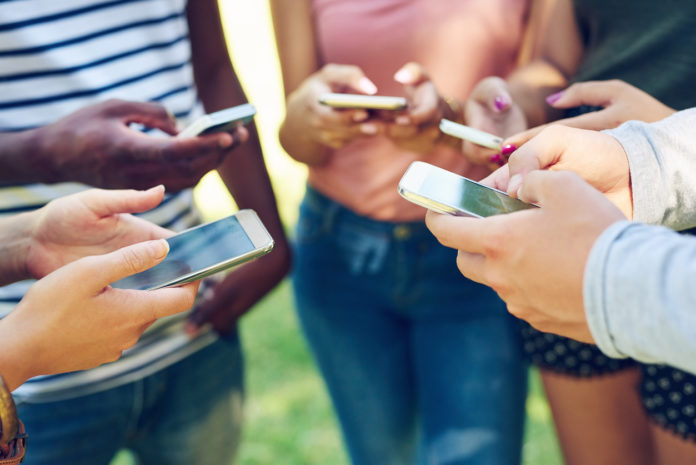 Parenting Advice: Are Your Kids Addicted To Their Mobiles? Probably Not

Kids these days, right? It seems like they’re constantly walking around glued to their mobiles, unable to look up from their hands and have a conversation like regular people. They’re plugged-in all day, every day, and that screen becomes their whole world. Meal times, classes, even when they’re sitting in the room with each other, they never put their phones down and actually look you in the eye anymore.

Chances are you’ve heard (or even had) rants like these yourself. Especially if you’re a parent in today’s world worrying about your children’s addiction to their mobiles. While it is true that there are some people who have a clinical addiction to video games or phones, it’s a very small percentage of people in the world. So if you’re looking at your kids, and you’re worrying over how often they seem lost in the digital world, just remember something:

What you’re looking at probably isn’t an addiction to mobile devices. It’s the same thing that happens every time the paradigm shifts, and a new generation embraces the technology of their age.

A Disconnect with the Older Generation

Every time there’s a shift in culture or technology, the older generation tends to look down on (or worry about) the younger one for embracing it. It happened back when novels first became common thanks to mass-market printing, it happened when automobiles granted younger generations increased mobility (and privacy), and it happened when cordless phones and video games first made their way into our homes. Today, it’s happening with mobile technology. While the specifics may have changed, the tune of “kids these days don’t know how good they have it,” is very much the same.

Part of this disconnect happens because the older generation grew up without mobile devices, social media, and all these other technological marvels that the younger generation takes for granted. A smartphone is an accessory and a tool, but older users remember what it was like when cell phones were rare and less powerful. Because the ability to look up something online instantly, or to use an app to solve everyday problems that used to be a pain in the butt, is a novelty to the older generation. But for the younger ones, that’s the way the world has always been. As such, that’s the world they’ve grown up in, and adjusted to fit.

Teens More Connected to the World Through Mobiles

And, when you think about it, mobiles are a unique way to solve the major dilemmas that have always come with being a teen. In the past, you’d spend hours on the phone with your friends because you were housebound until you could drive. This was especially true if your friends weren’t within convenient walking or biking distance, and you didn’t have a public transit as an option for getting together. So you’d call, and interact that way until you could all be in the same physical space. In today’s world, social media fills the same role for this generation.

However, social media and mobiles let teens interact with people on a grander scale than ever before. Not only that, but it allows them to reach out to people, and groups, they never would have been able to in the past. From book clubs to movie appreciation groups, teens can find people who share their interests like never before. This ability to organize in the digital space has revolutionized the way teens interact not just with their friends and family, but how they interact with the world at large.

One thing that older generations often miss, particularly those who complain about how teens are always on their phones, is that there is no separation of online and offline life anymore. In a world where you can make a living by posting videos on a website, writing articles from home, meeting your future spouse on a dating site, or where you can get fired because of a post you made on Facebook, there is no separation of online life and offline life. There’s just life, and the world seen through a mobile device is another facet of it.