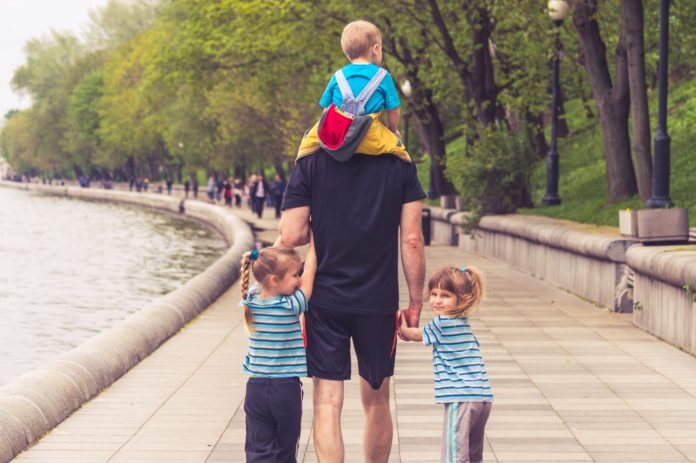 Whether it’s for PTA meetings, sports games, fundraisers, or parent-teacher conferences, meeting other parents at your child’s school can leave you bewildered, impressed, or even intimidated. Just like every classroom of kids has types like the “snotty kid” and the “spoiled rich kid,” there are 10 types of dads that you are sure to meet at your child’s school.

This is the one that can’t put his phone away. That’s if he even shows up. He’s too busy checking emails or watching his stocks or holding conference calls to even pay attention to his kid. He might be there for recitals, sure — you’ll be able to tell because his face will be lit up by his screen. He always seems to be checking his watch and will probably call you by the wrong name because he was too distracted to learn it the first three times you told him.

This dad brings discipline to a whole other level. He makes you look like a soft-hearted wimp. He is super strict when it comes to his child’s behavior or speech, and he has no qualms about disciplining his child in front of others. Their child will most likely be humiliated when their dad curses at them or grounds them for not getting the highest grade. You are pretty sure he’s going a bit overboard to put on a show, but you make sure you stay in line, too.

This type of dad is the color of ham and seems to have a bicycle helmet or sweatband permanently glued on his head. He jogs by the school every morning and then rides his bike to work. His wife is forced to bake gluten-free pumpkin cookies for the bake sale and sends their kid to school every day with kale in some form. He is constantly trying to get you to try his protein powder shake or to join him for CrossFit. His name is probably Gary or Doug.

This dad is there because he has to be. In his attempt to be a “good father,” he puts forth the minimum amount of effort while still checking the boxes he’s supposed to. This dad may not even know what grade his child is in, but he pats his kid on the head and messes up his hair to show his love. You’ve never seen him at any school events or fundraisers, and it’s certainly the first time he’s ever set foot in the school.

This is the one that’s hitting on you or your wife. Or all the other wives. And the teacher. He might be married or divorced — doesn’t matter to him. He’s got wandering eyes and no shame. This dad flirts with the women unabashedly and says all the corny things that he knows will make women politely laugh. He might even bring his golden retriever to get more female attention.

This is the dad whose child runs the household. This one coddles their child, waiting on them hand and foot while attempting to persuade the teacher to raise the child’s grade. His child is a monster who all the kids hate, but the dad doesn’t have enough spine to discipline him. Instead, the dad looks sheepish as his son tears down posters and kicks kittens.

This dad is former or current military. You can tell by the haircut and the tattoos and the way they command attention. This dad means business. He is ultra-concerned with his child’s grades and behavior — he expects nothing but the best manners and utmost politeness from his son or daughter. He has probably never told his kid he loves them but shows them his love through competitive games and too-hard punches on the arm.

This is the guy who cannot keep his mouth shut about how awesome he is. He has a huge boat, an enormous house, a much younger wife, and a luxury car or truck. And he golfs at the country club when he’s not busy tooting his own horn. He probably wears only polos or Affliction shirts, laughs pretentiously, and can’t believe you’ve never been deep-sea fishing. And he goes to the gym a bit too often, but he spends most of his time flexing at himself in the mirror.

You can find this type of dad at every sporting even his child plays in — he’s in the stands, yelling loudly at the referee or umpire for a bad call. A former college athlete, he takes sports a bit too seriously. The only thing he knows how to talk about is the latest football game or wrestling match, and he calls his kid “champ” or “sport.” You’ve never seen him in anything but basketball shorts and a T-shirt or a polo with khakis. He wears a whistle around his neck for no reason.

This dad is THE dad to be. He does it all. He coaches, shows up to every school event, and says his child is his “best buddy.” He has a hot wife, makes everyone laugh, and tousles around his great hair. Of course, he volunteers or runs a non-profit, writes big checks at the school fundraiser, and is a pillar of the community. He goes to the gym every morning at 5:30am so he can take his kids to school before work. But worst of all, he’s so humble and likable that you hate him.

How many of these dad types do you recognize? Are you married to one, perhaps? If you haven’t come across one of these dads yet, just wait — your child is in school for a total of 13 years. Try as they might, these dads aren’t perfect, but at the very least, they are present in their child’s lives. That’s